Hey you, come closer for a second. I have something really personal to tell you. It’s about your efforts to get more followers on Twitter and some of the misleading tips you’ve been hearing about how to get more of them. Lets keep this between us, OK?

It’s a harsh truth, so if you have a weak heart, you may want to close this tab. It’s cool with me I won’t be offended. You can just skip to the next post.

If you kept reading I guess it means you want to learn the harsh truth about Twitter followers and why it’s so hard for you to get those quality followers in large numbers.

I’m going to try and keep this post short and to the point.

Are you following these rules? Nice. Join the rest of the world with not getting almost any results.

Here are some of the useful tips social media experts and gurus have been promoting and you’ve probably read a hundred times for the last few years on how to get more followers on Twitter:

All these tips are solid. They are all true and will work. Hands down they will all get you results. But they will work very slow, you’ll be harvesting followers one by one and probably get exhausted from trying to engage everyone you can find online using relevant hashtags.

But I don’t have to tell you right? You’ve been following these rules seeing the drips of new followers. You are already using Buffer to tweet at better times, you are contacting influencers, etc.

So what are you missing? What is it that Gary Vaynerchuck, Seth Godin, Neil Patel and Chris Brogan are doing so different from you? 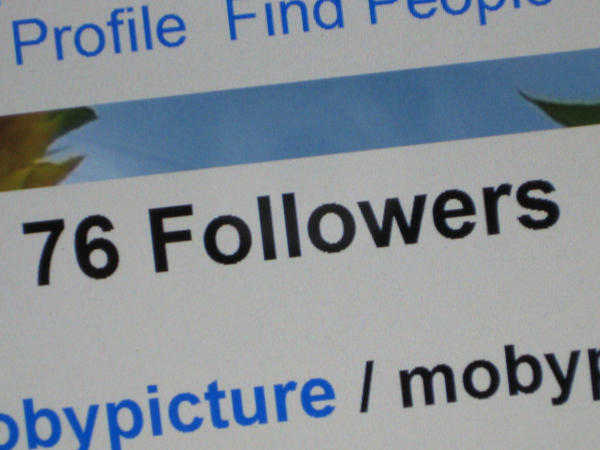 Are you stuck here?

Ready to get a million Twitter followers? Here’s the secret.

Lets break it down for a second: What does Obama, Kanye West, Ellen Degeneres, Gary Vaynerchuk, Chris Brogan, Neil Patel and both Leo and Joel from Buffer have in common? They have all done amazing things, built amazing careers, wrote influential books or built products people want to use. They’ve all done something truly great and are also Twitter users.

Sure they all follow best marketing practices on Twitter, but that’s not why people follow them. Kanye West didn’t top 1 Million followers in a day for sharing “great content”. He got there for being f***ing Kanye West.

If Leo from Buffer just shared nice articles but didn’t build Buffer and created (Notice the CREATED) amazing content by himself he probably would’ve never gotten to be such a big influencer. Know what? If he hadn’t built Buffer, I’m not sure simply creating all that content would have got him to be such a big influencer so fast. He a great product people want to use and marketed using Twitter. Are you getting to where I’m going with this?

Want amazing Twitter growth? GO AND DO SOMETHING AMAZING IN THE REAL WORLD. Build a great product, write a book, give talks, be the president of the United States.

You’re a part of someone else’s amplification process. You don’t care about the P.A system, you care about the song that is playing. Be the singer, not the speakers.

You can do your best to become a great resource for others in your community. That’s a nice sustainable strategy. Is it a growth strategy? Hell no. Nobody wants to sleep with the guy who knows all the lyrics to Nine Inch Nails’ The Downward Spiral, but I sure do know a few girls who would love to spend a night in the arms of Trent Reznor.

If you want to really be great on Twitter you have to create amazing things. Be it content, products, fight for human rights, whatever. Don’t be the number one follower, be the leader. The one who actually gets amazing things done, not just share the story about something great that happened.  The bigger things you’ll do the more followers you’ll have faster. Pretty logical right?

Most people got to believe that by being helpful or sharing interesting content on social media they’ll get huge and become thought leaders, but that’s misleading. Social media will help you amplify your message. But unless you’re doing something really interesting – you will never be really big because you’re not the one crafting the message. You’re a part of someone else’s amplification process. You don’t care about the P.A system, you care about the song that is playing. Be the singer, not the speakers.

The Hierarchy of greatness

I tried to define a pyramid that captures best the hierarchy of ‘Amazingness’ in correlation to getting fast Twitter growth. You can see it below: 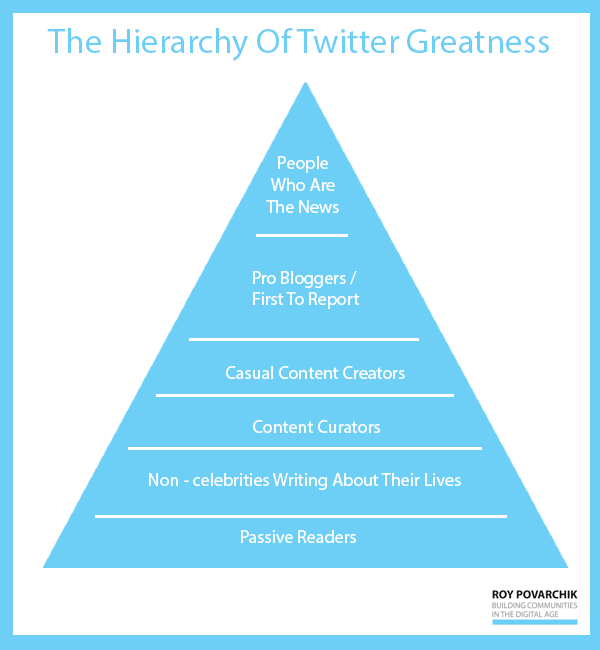 Just to be clear about my bottom line here: Using Twitter for your marketing is great. It’s a powerful tool that can amplify your message and help you get where you want to get pretty fast. But not all Twitter users were created equal. The more value you give to the world, the more it will reflect on your Twitter account. It’s pretty logical when you think about it. The bigger chance is that if you are the news itself it’s more likely you’ll get more followers then just the hundredth guy reporting them. Be the news.